One child. One job.

I've raised a confident child. She's already braver than I was at 16 and she's only 8. She has an opinion. She likes to fight her case and she's extremely head strong. I know it's just her growing up, but the last few months with her have been a little taste of hell. Hitting a child is illegal in New Zealand, but it hasn't stopped me from the odd flicking of her ear when it's absolutely needed.

I tried to inject in her that Mum is the boss of all, but the older she gets the more of a joke that injection has become. I know this is normal. I know that I am not immune to the wrath of a child. It's my first time parenting a child who is determined and hard headed, but I also know that how she is is a ramification of being with family where we, without thought, collectively raise each others children.

A few days ago we were sitting at my Mums. She walks into the house and I asked her to shut the door (so the dog doesn't come in). I don't want to. It's hot. I let her know we don't want the dog to come in. It's hair is everywhere anyway. Who cares. I ask her why she isn't listening. Because I don't have to.

I get up and flick her ear then my Mum, after hearing the conversation, tells me to leave her alone.

While Stiddy was here last night I saw her watching me with him. She started to get lippy and annoying and I made her sit on the floor and tell me why she had such an attitude. After tears and shrugs of the shoulder she finally pointed to Stiddy.

I told her that was pretty normal to feel that way when a new baby comes along. I told her it happened with Rome when Avi came along and that babies need more care than bigger kids who can do more things for themselves. She understood that, but for me that didn't explain her attitude for the past few months because he's only been here a handful of times.

You're mean because you make me clean my room and brush my hair and brush my teeth.  All the other kids don't have to do that.

This is where I thought, oh poor little demon spawn .. you don't know squat.

Long story short ... a little girl is going without a device and TV till December, not for punishment, but because fresh air and life can be found outside. 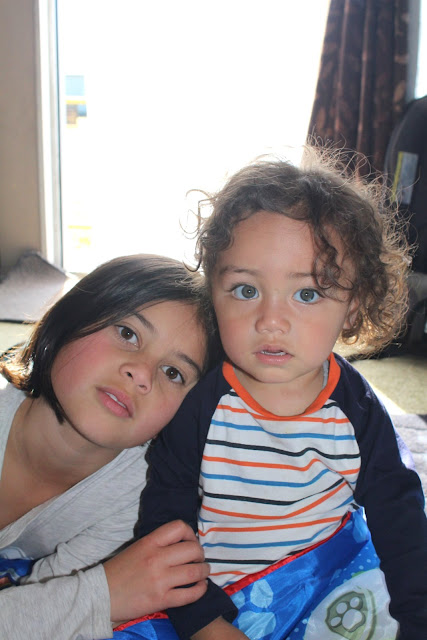 I was talking to my cousin about it a few nights ago. A proud mother of 4 raising her kids in Saudi Arabia. She said the best way to raise a kid is not to give them anything.

I'm not going to give Hub's what she wants.
I'm going to encourage what she needs.
Love her to bits .. but she's bloody impossible.
at October 09, 2018