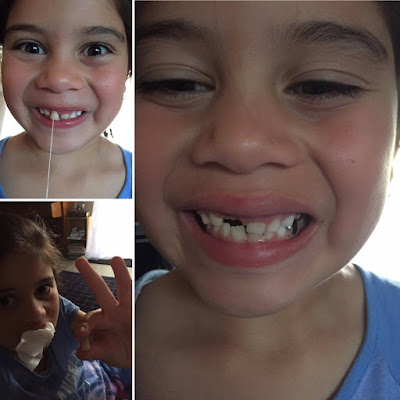 3 years ago she ran into the back of a chapel pew and killed her two front teeth. The dentist told me the two teeth would turn black and give her problems until they come out and suggested I take her in to get them both removed, but she was barely 3 years old and I didn't want to do that. Someone else told me to just sit and watch for a few months.

A few months ago her dentist said the teeth need to come out to make room for her adult teeth. I spotted the other tooth last week and, on the down low, did all I could to wiggle that old baby free. I'd throw a ball at her face in the hope something would work. I spoon fed her like I feed Avi and hit her tooth "accidentally" and during a pillow fight last month, I whacked her extra hard. It's ok, she didn't cry.

Got down to business tonight. It had to come out. We pulled for 10 minutes before I just gripped it between my finger and thumb and yanked it out.

The tooth was huge and smelled like Parmesan cheese.
Now she sounds like Sylvester the cat.
at November 09, 2016