The End of August.

August 30, 2016
Hub's is 6 on Friday. We're heading out of town for the weekend to spend it with Sister in Auckland and her brood. Mitchy's crew are coming too (how could I possibly leave Avi for a weekend?). There will be so many kids in the house that I should be dreading it, but sometimes getting out of town and spending it with ten kids is worth the headache. Sacrifices. Trying to plan a run away with sister and Mitchy one night we're there. Leave all the kids with Uncle Joel, Shaily and Ezroid.

My Mum hates us all for leaving her here and she said she won't forgive us unless we bring back pillows from the markets.

Received this photo last night of Avi with my Grandmother, Ma. They thought it was hilarious. I thought it was so not funny that I sent swear words to the two who thought the image hilarious. I lost sleep because I kept seeing my poor Avis crying, scared ...

People forget how scared Harry Potter was of dementors.
Not fricken funny at all. 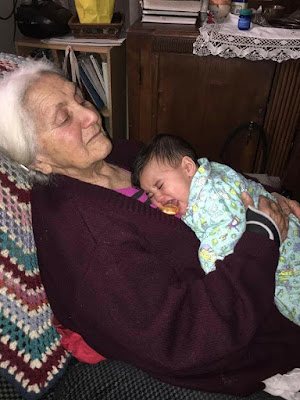