Have you ever taken the time to really sit down and ponder the moral of the Sandy & Danny story from Grease? It's OK that you know all the words to every song from the movie, just don't follow Sandy's example because it's a great example of what not to do for someone else.

There are a few in my life with the Sandy complex. They changed for people and nothing has progressed because of it. Sandy may have looked better, felt better that she got the guy and probably overcame the issue of Danny hiding her behind the menu at the restaurant when she yanked herself into those tight pants at the end, but the car would have still flown without her downgrading for someone, who, quite frankly, was a drop kick.

The Sandy complex is also known as the Bella complex. She sold her soul for a vampire or The Anastasia Steele complex. Yes I saw the movie, which was G rated compared to the book. The Romeo & Juliet Complex. She betrayed her family for a boy and we all know how that turned out.

This complex is downgrading yourself for a person who is already at that level. It doesn't leave anyone happy.

I've had The Sandy Complex. I haven't been to sacrament meeting in nearly 3 months possibly more. It was to avoid the irreverence at first, but even when I sat outside trying to marinate my mind in talks, the irreverence followed. It became something else.

It dawned on me yesterday, after talking with family, that my faith became a Sandy Complex because I was mentally testing my ward to prove a point.
The points being:
Then my Visiting Teachers came this morning and left a message that was a reminder that the Spirit of my Ward is in the people who still make the effort, those who have you in mind enough to climb up my patio steps with a walking cane to deliver a message that allows you to see that the light may be dim in the ward, but it's still there. 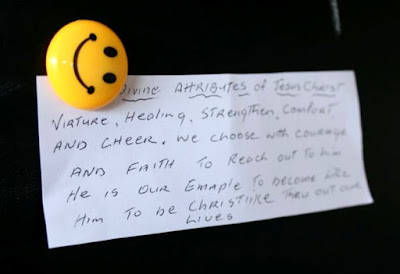 That's why I always liked Medea better. First she was a total Juliet, betrayed her family and her gods for a dude. Then her got bored with her, found a rich blonde, and was like, Peace! But did she just cry? Kill herself? EFF no. She kills his new lady, and his kids, and his crew, and sinks his ship, then pray to his gods who took her side, because he was a dick.

IvE never been ok with sandy changing herself either. I hope things get better.