I learned the origin of the Nachos when I was in Mexico back in 2008. Wives of Americans, who were shopping in a little town just over the Texan border, went to a restaurant after closing time. The waiter of the restaurant only had tortilla, cheese and bottled jalapenos at the end of the day, which he served them after some quick thinking.

He called it The Nacho Special en español. 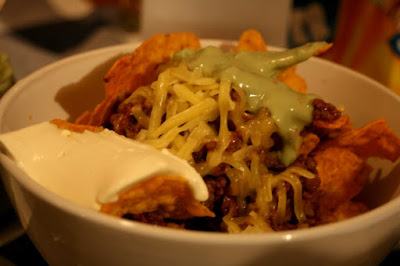 The chef in Ensenada hinted that the Nacho dish was frowned upon and he considered it 'a poor mans snack'. He tried not to tie it's origins to Mexico, but alas ... see above.
I was never a nacho fan myself, but unless I fold chocolate into the mince/ground beef ... this child is not going to eat it without tortilla chips and cheese.