Scrolling through Think Geek tonight I remembered that I asked Larry once what proof he'd need if I were to build a time machine and go back to when he was a 25 year old. I asked him if telling him about his life up until that point would be enough. He said no because he'd just think I was a stalker. Then I asked him what if I told him his future and he told me that that wouldn't be fair to him because then he'd know what and who to avoid and would miss meeting some great people in his life.

I asked him if there was any prominent moment in his life that, when hearing it from future me, he'd believe my claim. He said no, he'd just think I was loco.

What would make you believe I was from the future then?
A 64-core processor computer with at least a 500-petabyte hard drive and 9 terabytes of RAM.
I wouldn't go back to the past for that kind of dork.
Yes you would because you just built a time machine, dorkette.

I miss that dork.
Want one, would prefer a real Tardis, but a SuperMom mug is just as fab. 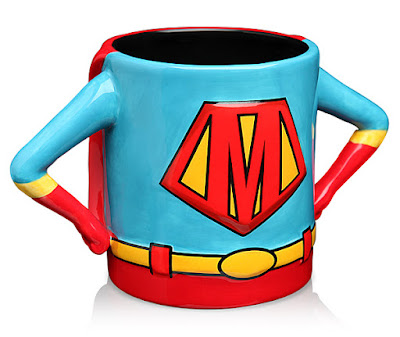