Currently, my FB news feed is littered with my deranged family and friends and their photos of the All Blacks who have, apparently, been walking around Napier like commoners. It's too wet to go anywhere in The Bay at the moment. The best photo was of one of the players through a window and he was trying to put his hoodie on to avoid the groupies trying to snap a shot of him through the window. 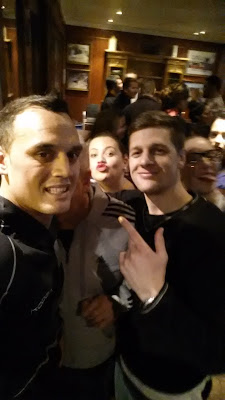 Who knew Izzy Dagg was a selfies man.
If you wanna be a groupie in Hawkes Bay, Ahuriri is the spot on a Saturday night.
Not that it's going to matter, because it's Argentina, but Dagg hasn't yet been recalled to take up a position in the infamous team for this weeks test.
Salve Argentina!
at September 03, 2014