The All Blacks played their first test for the season tonight. I watched the live game at 7.30pm. By 9.30 I was confused so I watched it again. Felt the same at 11pm and watched it one more time.

What a lifeless game.
Did you know, 16 English players were missing tonight? They're all wrapped up in their Super 12 final, so the English team was way minus it's usual players.

Black left me depressed. They were there to play the game yes, but they were not there together to play the game. If that's an indication of the All Black season, I'm not going to be fizzing about anything All Black related this year. Who was fizzing tonight was Fekitoa. His debut tonight as All Black #1131 was the best part of the game.

There is no fire in a game when you pull your finger out in the last 3 minutes. 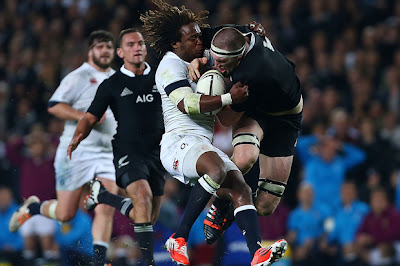 Email ThisBlogThis!Share to TwitterShare to FacebookShare to Pinterest
Labels: All Blacks, rugby, rugby 2014

I heard the game sucked.
My bro and his wife was there. They were so pumped to be there, I'm sad it sucked.