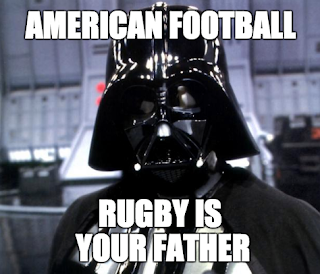 I'm glad I don't gamble. I would have lost like a sorry mofo today.  I knew it was doomsville for Denver in those first 12 seconds. Peyton Manning, what in the bloody hell?

Now let me tell you why rugby is better than American Football.
Players tackle with their heads in football, hence the helmets and the padding is the icing on the cake backing the tackle with all that brute force. Pretty sure that only makes the injury worse. That ish is illegal by rugby law. Headgear is not a helmet. Sparse padding is not indistinguishable armor.

No cheerleaders. No one wants to see you do the splits wearing hot pants in winter, girl. No one.

While I like forward passes, I do not wish it for rugby. It's strategical in rugby to pass back and it works. I understand that blocking can bring a team together, your whole team attacking to get a touchdown, but not blocking gives an advantage to the sole rugby player with the ball who has the entire other team against him - basically. That's where you witness true strength in sport.

Superbowl began at 12.30pm and ended at 5pm. Just when I thought sitting through 30 minutes, combined, of scrum time was enough to stab myself in the eye, it was suddenly 5pm.

I think I've said enough to win my case.
Speaking of which, Super Rugby begins this month.
Aren't you excited?
Crusaders vs Chiefs on the 21st.

Why would anyone want to be a cheerleader? They get paid like $1000 a year. That's insane. Homeless people panhandle more than that a month.