I've heard about them, mostly from my sister who grits her teeth when she relays the memory, of kids acting up in the super market. How you have to remain calm so the people around you don't think your parenting is substandard, where you hope the flushing in your cheeks looks like blush and not rage. I'd only ever heard of it.

Went shopping with Mitchy today and she (and Livian) tend to give in to Hubba when they really shouldn't. I understand it's because compared to the rest of the kids, she's quite angelic. It started off with the kids shopping cart I never let her in, not because it costs $2, but because the restrictions aren't as confining as the default trolleys. Similar to this: 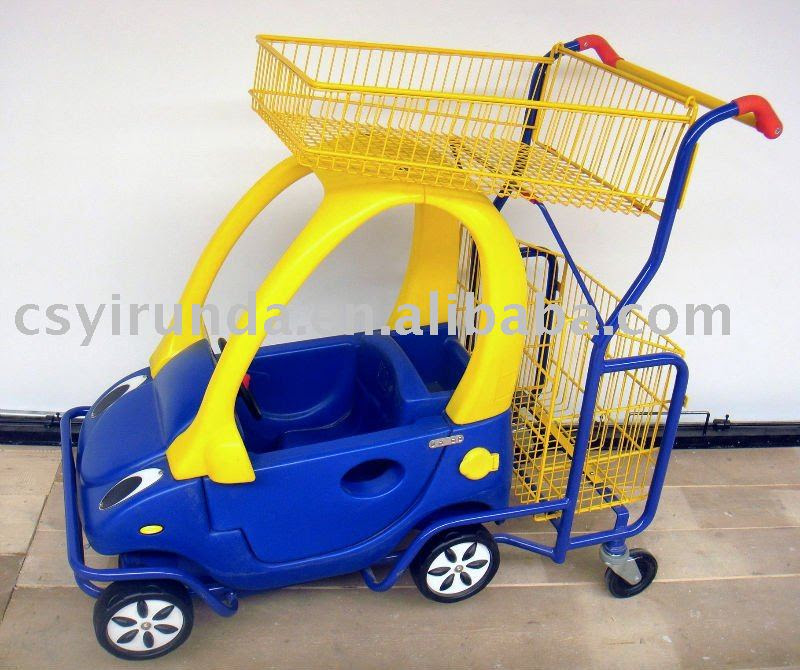 Got to the deli area and thought I'd be funny and scare her with a salmon head from the freezer. That act welcomed the first tears. Sorted her out by offering candy in the next isle.

All was well until she wanted to hang out of it like prom kids do in limos in the movies. She also wanted to hang her feet out the door, so when we turned the corner and she flew out of the car-cart, she lost the plot ... but not as much as I did. She cried and cried and cried. I asked her nicely to stop and when she didnt, I excused us both from Michelles presence stating, "I'll just have a word with her".

We were in the beer aisle and I was trying to negotiate with her to be quiet. Didn't work so I contemplated alcohol in the freezer just till she was ready to listen. Saw the Stake President Exec. secretary coming towards us with his wife. Looked the other way and tried the grit-my-teeth-and-ask approach. Works with my sisters kids. Mitchy and Tashi shoot looks at their kids. The teeth gritting worked and she calmed her farm and off we went.

First time for everything right.
Traumatic Tuesday became titanic Tuesday when I got home and got an email from my Villa request for Girls weekend away. It was accepted, but the icing on the cake is this:

Specifically, September 6th.
My birthday is in March and I'd like a corporate box with a VIP into the after party - Mitchy & Furness, two trolleys.
at December 03, 2013