Hubba has finally found her inner strength and voice. She tormented us all in the people mover yesterday and it was one of the worst drives back from Auckland I'd ever had and everyone in the car, except Hubba, will agree. She slept the hour it took to get from Auckland to Hamilton and was wide awake the rest of the trip home, which was longer than usual for some reason.

I wanted to throw her from the car before we hit Tirau. After spending a year being picked on by Ngawi and Rome, I sat her down about a month ago and told her she had to stop being a baby and stick up for herself. I didn't realize this was an invitation to completely own them both. She pushed him off his wheelchair last week because, "He made me angry". She tormented Rome all morning and argued back when I told her to stop being naughty to Rome. "She's being naughty to me!". You know Rome has lost her mojo when she breaks down and cries because of Hubba. She bought her cousin, Jasiah, to tears on Monday night and that boy would make Lucifero cringe.

It's kinda not funny anymore.
Time for some grounding I think because pulling her ears isn't working anymore because she just does this, runs away and hides under the table .. 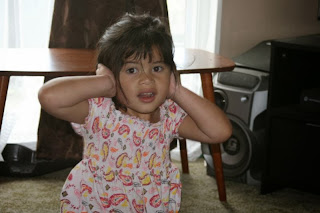 .. and she knows I won't crawl under there after her, not even if there were unlimited spilled M&Ms all over the floor.
at December 18, 2013

i kind of love it.

in my life i've been bullied, i have been the bullier, and i've taken care of kids after they were bullied and taught kids who were bulliers.

i think she will find a balance, and i think its good shes learning to express herself, and that shes not a baby or the least important and her voice matters :) it may just frustrate the hell out of you while she finds that balance. good luck to you both!! :)