Visited my cousin Milton in the hospital this afternoon. He's in the renal ward recovering from a ruptured tumor on his kidney. He said he felt it burst and had all the symptoms of a patient who's kidneys are/were failing. It was good to see him.
His sister, Harriett, came for dinner tonight.
We had Capsicum & Beef stir-fry Cantonese style. 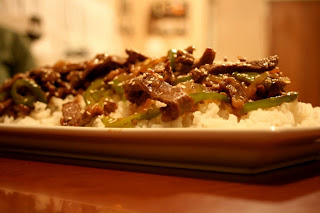 Berries aren't in season (I hate all berries with a passion), so we had frozen berries, dulce de leche and ice cream with Ice Cap chocolate for dessert. It would have been perfect without the berries and with broken cameo cremes (think malt oreos) on top. 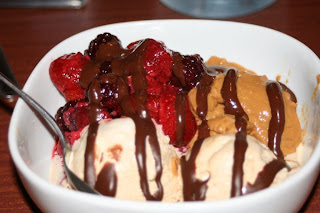 Crusaders crushed the Chiefs in a 43 - 15 score match. For the NZ Conference of the tournament, Chiefs needed a bonus point tonight, but no luck. Israel Dagg ... man of the match with a try that put them well ahead after half time.
Only bore was the ref who seemed to be TMO'ing* alot.