Back in August on our anniversary, I posted the following status on Facebook (I know, I hate to love FB too).

So when Tyler gave me Richie McCaws book for my birthday, a book I'd been wanting since Christmas but was too expensive, I was one happy birthday guy. 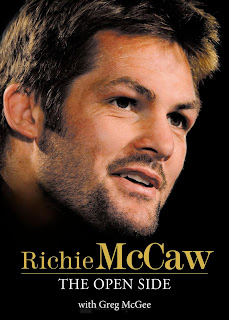 Switched covers this morning before I went to church. Replaced the cover with 'Temples of the Lord', which fit perfectly. I planned to read it during church, but I was too busy. Did the same thing a few years ago with Deathly Hallows and said Avada Kedavra instead of Amen after a prayer.

I've always enjoyed rugby. Aunty Marva was a rugby nut, but since having to pay $40 per game (pay-per-view) during the 2003 and 2007 RWC, I learned to love it. I had to justify that much money spent per game somehow.

I'm in a few chapters of the book, but the second chapter in particular, The Wrong Picture, talked about the All Blacks game against France during the 2007 quarter-finals. They totally lost the game because of a cabbage ref and a forward pass that went unnoticed, but there's a paragraph in that chapter that took my breath away as I read it because it summed up, in one paragraph, the emotion that is a rugby game.

"That's our game. That's what we resolve to do. Impose our style. Keep the ball, hurt them, don't let them breathe, be relentless, take their resolve away from them, find out whether they really want to be out there with us for every second of these last 40 minutes, being stretched, compressed, shunted, battered, pummelled, having their lungs seared, their bodies bruised, their confidence overrun with rats of doubt in the face of our indomitable desire to beat them"

Unfortunately, Richie took a sabbatical for 6 months and his Super Rugby team the Crusaders are feeling it because they suck this year. In chapter 4, Big Sky, he talks about his love for flying and details the perfect atmospheric conditions to go gliding.

"But if you fall into the cold sea air coming off the west coast, you won't get enough height to get home".

The Crusaders have been basking in that cold sea air for the last 4 weeks. Dude needs to come back and remind his team of how and why he won RWC 2011.

Could also be Guildfords absence, but that's his own fault.

Email ThisBlogThis!Share to TwitterShare to FacebookShare to Pinterest
Labels: rugby