School is stressing me out. I'm mere nasal hairs away from giving up because some of this crap is over my head. Like really, what in the hellnoids does probability have to do with giving someone an enema as an RN?

Speaking of RNs, my long days in the hospital with Larry has me thinking nurses irritate me, bar one named Pam, who is the love of my life when it comes to tending to Larry with patience and care.

This is what happens when nurses go on lunch breaks AFTER I told them his lure was coming out. I didn't mean to say the F-word to her because I understand public health, but I've also learned in my study guides that a patient who has been given anticoagulants that has a bloody lure hanging off of his arm is more important than a ham and cheese sandwich. 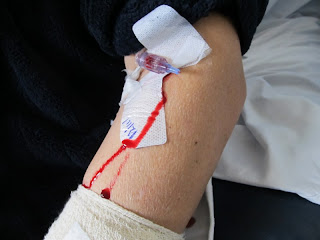 The babies visited the hospital and here they are laying on the dialysis drain bag that they have named "The Mimi Pillow".
Mimi means pee in maori. 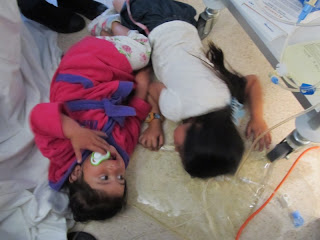 Re: Larry.
It's a collapsed lung.
He's still in hospital to finish his treatment of anti-biotics. Hopefully he is out tomorrow. Being home alone sucks sometimes.
at November 15, 2012