Shirley Bassey was right when she sung it.
For the last 2 years, Thanksgiving has been spent with a sick husband and this year will be the same.
From the beginning.
Woke up yesterday to a husband who was pale with blue lips struggling to breathe. One of those mornings I've been waiting for for the last three years when I had to slap his face for him to wake up, which he did thank billy-bob. He struggled to get to the car and into our GPs office.
She called the ambulance. 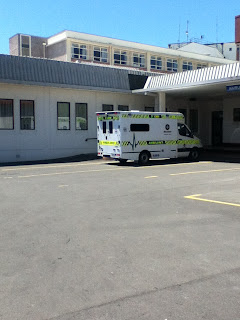 His first ride in the NZ ambulance. Found out its not a free service.
Excuse the dots on his belly .. I used wingdings to censor his brusied belly. 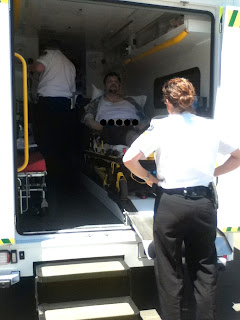 He is in hospital again as of yesterday and will be over the weekend. What I've suspected the whole time (overloaded) is basically what they diagnosed. He was placed on a 15 hour dialysis regime last night that didn't go too well and they had to change his program after hours because he couldn't breathe. Ultrasounds show fluid around his heart and lungs, but no edema in his limbs. They're talking pericardiocentisis, which is a  drainage treatment where they insert a  tube into the chest to drain the fluid around the heart in the pericardium or around abouts.

At school, last weeks paper was on the respiratory system and he was admitted to hospital for trouble with his. This weeks paper is on the cardiovascular system. Coinkidink?

I'm concerned because next weeks paper is on the female reproductive system and if he winds up in hospital with troubles there .. then someone has some 'splainin to do.
at November 23, 2012