6.50am sunrise this morning.
I only woke up because I could see purple colors coming through the bathroom window. 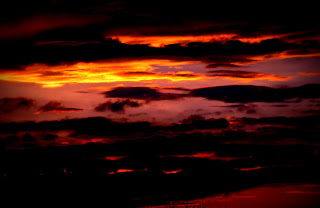 Most people know I have a perfume habit. I haven't purchased a bottle of anything for a few years because of the downgrade from high to low maintenance. My two recent bottles, Echo by Davidoff and Crystal Noir by Versace, came as payment for a fragrance website I did some work for. Perfume is not cheap here. I have so many perfumes because they were cheap in the USA. So when my brother bought back Katy Perry's Meow from Australia for his wife, I caught the scent of it and knew it was right up my alley.

A late anniversary present. It really does smell good. Doesn't last all day like Hypnotic Poison by Dior, but still a top notch scent. Larry's anniversary present is a new graphics card, more RAM and an 8 core something.
Since I passed math, the ratio of the gifts is 7:80.
Just sayin. 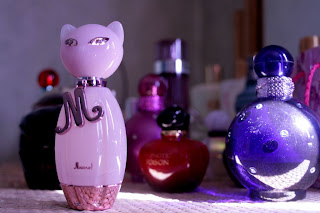 I like the sweet, smells-like-you-could-eat-it scents.Worst perfume I've ever had is the Twilight perfume Forbidden Love (I'm rolling my eyes too). It never did smell like the supposed lavender and freesia it claimed to smelled like, but resembled more the ocean-breeze 99cent store toilet spray. Got it from eBay for $50USD and sold it to a hardcore twilight fan on TradeMe for $300NZD a few christmas's ago. There were a few of them battling it out to win it and that was the final price.
Pendejo.