Leven made her debut lastnight.
I'm pretty sure she's named after Porthleven Beach in Cornwall (UK), which is where her mum is from. She's cute. Looks like her Dad .. except he's ugly. I think her middle name is Neihera .. which is Natalie in Maori. 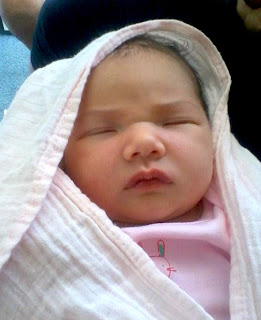 Regarding this previous post.
The mystery has been solved. My cousin Mere revealed herself to be "the one" last week.

Email ThisBlogThis!Share to TwitterShare to FacebookShare to Pinterest
Labels: family