I was called anti social today because I declined an invitation for a rare get together for brunch. Today was the 3rd time I've declined in the last 2 years.
I was ok with the comment until it was followed by remarks like, "You're a hermit", "Get out of the house once in a while", "He doesn't need you 24/7" and "What's more important?".

People have no idea and when you say comments like that without thought, go figure why you get rejected. Not that I need to dignify your comments with a response ... but I know you all read this blog.

You're a hermit:
My second home is the Memorial hospital.

Get out of the house once in a while:
Mondays, Wednesdays and Fridays I drive to and from town four times. Thursdays are spared for our GP. Tuesdays are the day after his biggest dialysis treatment after a 2 day break from it and dialysis is exhausting. Saturdays are family days. Sundays are for God .. it's the least I can do because he answered two years of prayers. 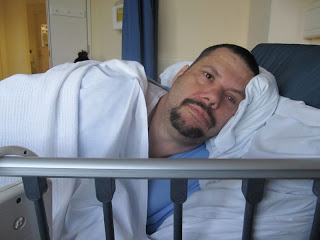 We went to the hospital at 9am this morning for pre-admissions appointments for Wednesdays op. He was admitted to hospital today after his Monday dialysis treatment for emergency surgery tommorrow. He'll have an early morning surgery for the Tenckhoff and another on Wednesday, after dialysis, for his left eye. By Thursday he should be in some serious pain, so I'll sit with him in the hospital all day until closing time. Friday he has dialysis treatment and he'll most likely be in over the weekend, where again I will sit with him until the hospital closes.

Much more important than hot chocolate and a muffin.
"Fool of a Took! Throw yourself in next time, and rid us of your stupidity!" - Gandalf the Grey.