If you are outside of New Zealand, you won't know that for the last 7 - 8 weeks, the country has been host to the 2011 Rugby World Cup, an international event that occurs every 4 years. The first world cup was held in 1987. Both New Zealand and Australia hosted the competition in 1987 and that was the first, and only time so far, New Zealand took the Webb Ellis Cup when they played against France.

Tonight is the last game for the 2011 competition .. and we'll see if history repeats itself as The All Blacks take on France.

My favourite All Black?
The 1937 Lock chasing the ball in front.
(2nd from the right). 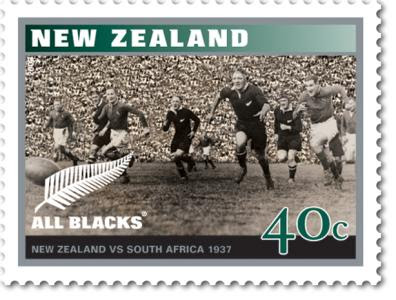