We were talking about Haemo dialysis vs Peritoneal dialysis yesterday and both were confused at why patients prefer Haemo over PD. Thinking back to last year when we did 10 weeks of it in Auckland, the only thing that made it less depressing was the nurses. Here, it's pretty depressing. I cringe leaving him there for 5 hours. If you know Larry, you know he has enough Sandia Lab stories to makes your ears bleed. The guy talks alot, so I feel for him when he has to sit there for 5 hours with no one to talk to. Why don't I sit there with him you ask? Because I've heard the same stories for 11 years and I'm on strike in that department.

Public vs Private health. Definately a huge difference. Larry has only been in the public system for a little over a month so we've had several appointments with renal people who are coming to the appointment with the idea in mind that we know nothing about end stage renal failure and every advantage and disadvantage that comes with it physically and otherwise. It's safe to say that I know more about End Stage Renal Failure after 1 year of experience than I do about photography after 12 years.

Everything is running smoothly for us. He still hasn't become bestfriends with his computer yet, half the reason being because the room it's in is like an ice box. Alas, Spring is 8 days away.

Happy Birthday to our big niece, Tyler, who is 18 years old today! 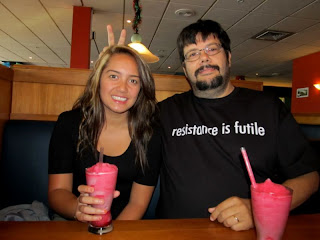