It's a cold day in The Bay today. 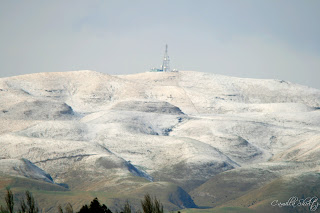 The story of the Te Mata Peak hill scape is centuries old when the Maori lived in Pas (fortified villages) on the Hastings plains. They were always under the threat of war from the coastal tribes so a kuia (wise woman) suggested at a gathering in nearby Paki Paki that the chiefs daughter, Hinerakau, seduce the chief of the coastal tribe, a giant, and have him fall in love with her in an attempt to turn him from war to peace. This was accomplished and the chief Te Mata fell in love with Hinerakau.

Holding a grudge against the past, the people of the plains wanted revenge and demanded that Hinerakau make Te Mata prove his devotion by completing tasks that seemed impossible. His last task was to bite through the hills between the coast and the plains, so that people could come and go more easily.

Te Mata died while eating his way through the hills. His half accomplished work can be seen in what is known as The Gap or Pari Karangaranga (echoing cliffs) and his body forms Te Mata Peak.

His feet are on the left of the picture. Move up his body you have his knees and up move even his appendage is visible. Move directly up from my stamped signature along the bottom you have his chest and finally his head. Behind him, half pictured, is "The Gap". 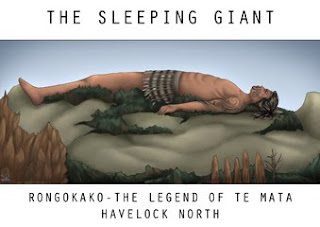