July 22, 2018
The two week holidays weren't a holiday. Livian and Shaily did nearly 100 hours at work between them and I did 75, which is 5 off my normal bi-weekly. It wasn't a holiday afterall.

Sisters kids came down for the second week. That week was also spent at work, where they all learned to appreciate the college campus. On Tuesday night their Nan treated them to the movies. I went along because I do like the Jurassic Park/World movies. Before the movie even began, Hubs was having breathing problems. I thought she had choked on some popcorn a few minutes earlier because I had told her off for eating it before we were even in the movie theater. Turned out she was having an asthma attack. Her lips went blue and everything and it was a long 1km trip to the ER. She was very scared and I did my best not to panic and say swear words at the slow cars. They took her immediately and ventilated her for 30 minutes before she turned her normal color. 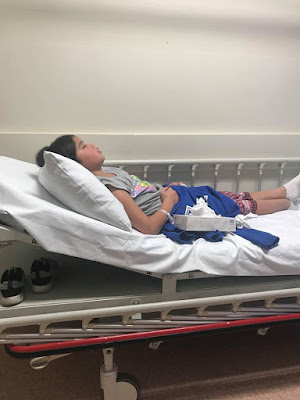 Diagnosis was asthma onset by allergies. It's happened before and was worse last time for an allergic reaction, but worse this time respiratory wise.

So back to work tomorrow. I tried to take the day off because I haven't seen my Stiddy boy all week and wanted him tomorrow, but I have to go to work because the boss lady said so.

It's OK though .. I love that place.
Gotta stop eating their food though .. if I'm to look like Beyonce by summer, I need to befriend salad again.