September 03, 2017
Yesterday was busy, we had to make time to have a birthday lunch with Mitchy. She was busy too. Either way, Hub's turned 7 yesterday. We had to race over to Napier to catch Tyler's show at the Civic Theatre. I hauled three teenagers with me because they wanted to be all independent and walk around art deco-ville. I told them to be back at the car by a certain time and when I called them after waiting for them for 15 minutes, they told me they were on the other side of town. Picked them up with the intention of dropping them off at home so I could meet Mitchy for lunch, only to miss the Meanee exit to the freeway home ..

Mitchy had basketball coming out her ears for Jesticles. She was everywhere yesterday, but we managed to meet up and eat.

Then it was to Tyler's for cake, which Hubs dropped on the floor.
Then it was back to Mitchy's for cake.
Today we had the final cake.
That's 5 cakes in total when you include Nan and Papa's cake on Thursday night.

Tyler's show was amazing. I told her all week I didn't want to go, but I'm glad I did. I get to hear the politics and dramas of the school from her and it draws me back from supporting her at the place sometimes, but then I watch their shows and it all makes it worth while. They do an amazing job and are true artists.

This particular spiel was about Maui and his mother Taranga, Tylers part, who thought him dead when she delivered him prematurely. She cut her hair off, placed the baby in her hair and secured him in her topknot. She cast him into the ocean calling upon the God of sea, Tangaroa, to take him.

Turns out he wasn't dead. The current took him to the shores where Tama-nui-ki-te-rangi found him and raised him as his own .. and then he fished up a very big fish and gave us Te-Ika-a-Maui - the North Island of New Zealand.

After studying Tikanga for the last 3 months, I don't roll my eyes at this stuff as much anymore. I'm not so racist towards my own people after learning about them.

Anyway .. the performance was breathtaking. I got a bit emotional at the point where she sends him off into the sea, most likely more seeing Tyler in her element than the actual mythical act.

A card from NM sat in the mail all weekend and we only found it today! From Gramma Doris. As I read the card she wouldn't shut up about not being able to have a margarita like the dancing chihuahua in the card.

And so, the kiwifruit juice margarita with Splenda was created .. and her final cake. 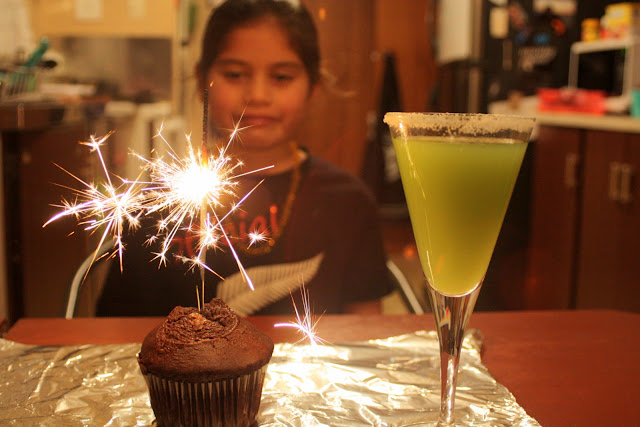 She took the card to bed. From 7.30pm to 8.30pm all I could hear was the mariachi band playing followed by hysterical giggles.

Me said…
When I was little grandma used to drink pina coladas, or maybe she had one once? In any case, I always associate them with her. When I was Morm I used to drink virgin ones, and now I drink regular ones. There waiter at the place in town I go even saw me in Seattle, and he yelled out "HEY PINA COLADA GIRL!" at me :) I bet Hubs will grow up not even really knowing what a margarita is, but liking the asthetic :)
September 5, 2017 at 8:47 AM