Matatini is being hosted in Hawkes Bay this year. You can tell there are too many people in Hastings at the moment. I went to the super market on Saturday and the whole place was out of toilet paper and milk. I've never really got into the spirit of Matatini. I never really embraced my Maoridom to be honest, but over the last few days I've stepped it up a notch.

Matatini is basically a kapahaka/dance festival for the top Maori dance groups in the world to come together and compete. In all honesty .. I didn't know what it was up until 4 years ago and it's been around for 23 years. The event occurs every 2 years in various locations around New Zealand and this year it's in Hawkes Bay.

Tyler would come home and tell me about haka powhiri practice they'd have on Sunday afternoons. I think it was only after the 3rd or 4th practice I asked her what it was exactly and what it turned out to be was exactly that, a practice for the people here to learn dance movements for when they greet the visitors who will compete in the competition. 47 kapahaka groups are staying at venues around the Bay and we have a group from Nelson at our marae.

I had been helping my Mum at our marae down the street over the last few weeks. I didn't want to because the crap going on down there is enough to make me want to never admit I have a marae, but my Mum needed the help and so I obliged. We did what we could and the group arrived yesterday.

For the first time in years I stood and watched a powhiri on my own marae and it was a little emotional because it had been so long. We use to frequent the place as kids, but it's a bit of a ghost town now. I watched our kids run around and play like we use to and it was bitter sweet. Bitter because the politics of the place are ruining it and sweet because the place still has a lot to offer.

Today they had the haka powhiri, the thing Tyler and her group have been practicing for months. It was held at the sports park in Napier and was set to host thousands. I was advised to go. I was promised it would be amazing, but the idea of that many people made me cringe and I said no.

I watched the opening thanks to people who went Live on FB and it was amazing.
AMAZING.
I regret not going.

Here's Ty being hearty Maori.
It will be her last performance this side of her pregnancy.
For the first time in a while, she made her Millz proud today. 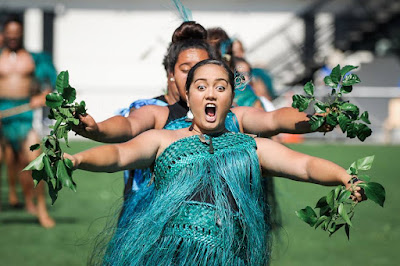 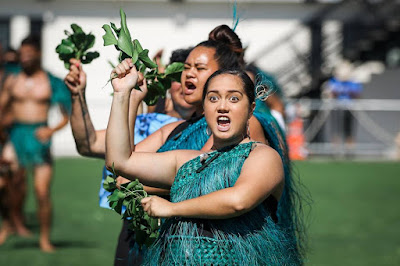 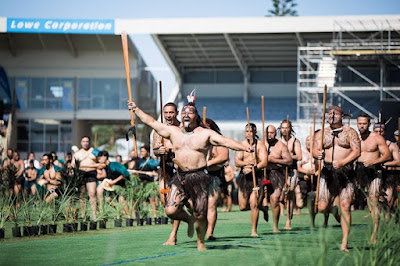 I totally hope this works. It's long, but it's moving.
I wish I knew the the structure of a powhiri, but I don't.

Kudo's to the uploading of the video: Anaru Ratapu.
I'd just like to add how much New Zealand media sucks. Matatini coverage barely got five minutes on prime time news, but apparently Kim Dot Com's eligibility for extradition is more important than the biggest powhiri of the year.
at February 22, 2017

Thanks for posting this.