MYOB - the act not the software.

One thing I dislike is how people lack the concept of minding their own business. Today, during 2nd hour at church, I was asked to play piano at a fireside this evening. I told the person I had a prior engagement I would try get out of and suggested she contact the actual ward pianist in the meantime. A little over an hour before the fireside was to begin, I sent a message to the person confirming I wasn't available tonight.

Ten minutes after the fireside was supposed to begin I get a text from someone, not even in the ward, who tells me about how I'm supposed to be at the fireside and asking where I was. It wasn't a question deserving of a response, but I dignified it with one, to which they responded 'someone's lying'.

I stood where I was, dropped a silent F-bomb and in my head broke the 6th commandment.

1. Don't ask me last minute to do something that has been planned for.
2. Mind your own fricken business.
3. There are people who I wouldn't trust to hold my toothbrush, lest they dip it in the toilet, who at times make my church activity minimal.
4. Felt bad about it for a few hours before ruling it off to piss poor planning and miscommunication. 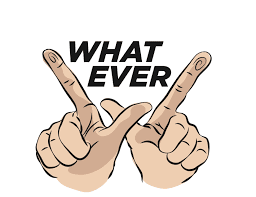 Dude, I would have flipped. Seriously, did they never go to school or have parents or anything to learn about respecting other peoples space and privacy and boundaries? You had a lot more restraint than I would have. You should have been like "GET A WARRANT!" ;)