When Larry died, one of the first things someone asked me was if I was going to change my surname back to my maiden name. I didn't think it insensitive because it came from my Dad and I know that he was coming from a place of simply just keeping his last name alive because eventually, a surname will die out with generations.

Last week I read why a friend chose to revert back to her maiden name after the death of her husband and all the reasons behind it were absolutely idiotic. I read the whole post four times and got more angry after each read. The entire thing blatantly told me that she's ready to get back on the horse ... quite literally ... and she was shadowing that idea with a name change.

She claimed grief - mostly - and where I understand that people grieve differently to others, the name change boggled me. It was like she was giving him up, not to move forward, but just giving him up. She also claimed identity issues. She doesn't want to be known as "that girl who lost her husband". She wants to retain her professional identity and somehow changing back to her maiden name will take away the grief and keeping her married name will submit her to an identity that was, she feels, completely her husbands.

Marriage is a huge change and that's why I took on his surname. I wanted to change to suit that change. It doesn't signal defeatism to your husband and it doesn't emphasize to your children of that submission.

In a duet the two instruments have equal importance to the composition. It's not always harmonious, but it works. There was no question about keeping the last name when he died. It identifies me to any children we've blended and it means more to me now than it did when he was alive. I married him for eternity. That name is mine for that long. I'd never go back and I told my Dad that the day he asked.

... and Shultz sounds better than McCaw. 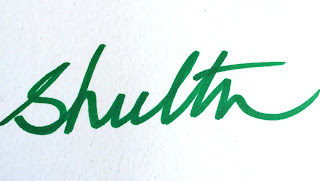 it literally never occured to me that a person would change their name back after the death of a spouse. i'm glad you're keeping shultz, and that hubba is too :)