September 22, 2015
We've been doing it for a few years now and it comes from great origins. All of the apartments we had in the USA only offered us a bar to eat at. This was new to me because sitting at a table to eat with everyone was natural. When we were newly weds we had a giganto box from a TV we'd purchased and that was our table for almost 3 years before someone finally spilled enough soda pop on it to ruin it forever. Our table cloth was a blanket.

No table in our second apartment either. We invested in those TV trays and I hated them so much, I bought a bar stool and ate at the bar in the kitchen alone because I refused to use the tray. Our last apartment just didn't have enough room and I resigned myself to the TV trays.

Whenever I cook in the kitchen, Tyler knows she must sit at the table. This is the time where she unwinds from work and tells me about her day and I tell her about mine. It's a daily thing. If she is in the kitchen, I sit at the table and we discuss anything. At times, Hubba will pull herself away from whatever she's doing and sit with us too during meal prep. When dinner is ready, we all sit together at the table and eat like a family. Always. It's that important to me and I'm glad my two know that.

We eat better when we sit together. Pizza is for sitting in front of a computer while scrolling facebook. Burgers and fries are for sitting in the car outside of a car yard watching people come in and out of a familiar store. and sandwiches are for when you are trying to rush yourself before that show starts on TV.

Sitting together builds relationships. It's a time to unwind and catch up with each other after a day of being without each other. It's making memories because I know that when Tyler eventually grows up and moves away from home (and Hubba), they'll be appreciative of the time spent sitting at the dinner table watching me cook dinner from cluttered cupboards and a busting-at-the-seams fridge. 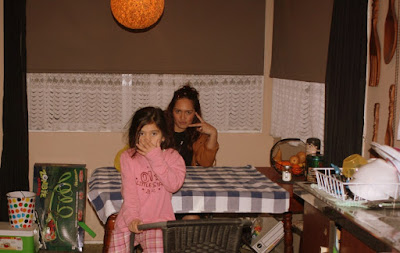 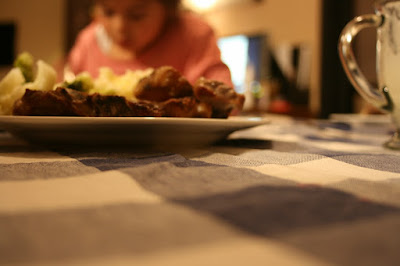 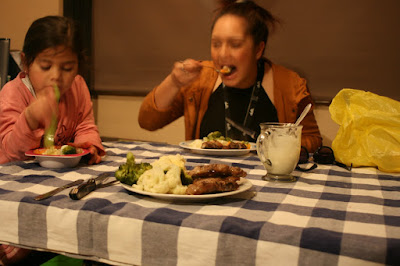 No kids in their house and 20+ years later, my parents still sit at the table together to eat meals. They downgraded their dining room table a few months ago, which didn't offend me because my house of three can still fit for our weekly meals with them.

I just wish I had a table big enough to fit everyone when there's an impromptu lunch or dinner at my house.

There are many rituals and traditions in our house, but this one in particular is the most important after prayers.