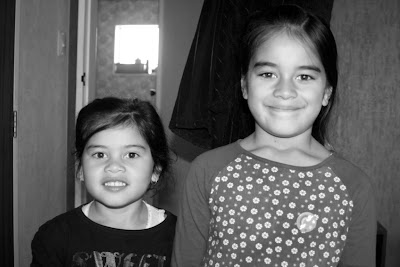 After 5 days you've adjusted to the running around, in and out of rooms.
You've learned to sleep through the 6am fights and only yell at the top of your lungs if you hear something break.
You learn the difference between a pretend cry, a laugh cry and a real cry.
You conform to the fact that there is going to be laundry every day and there will be alot of it.
You've come to terms with the idea that something taking five minutes will really take thirty.
You prepare yourself for the fights over what to watch on TV and who is on the computer first.
You know there's going to be someone who doesn't like dinner and they'd much rather have tomato sauce on crackers.
You utilize the older ones and brush it off when they complain under their breath.
You're ready for the begging when you stop at the grocery store and you've got the act of being mentally sound down as you walk with them all through the store.
You've mastered how to block them out when you're driving in the car and they're calling out your name to tell on someone, in unison and repetitiously.
I've learned to look forward to waking up in the morning to do it all over again.

They're good kids. Weird, but good.
I've had worse kids for less than 2 hours that have sent me into lunacy. Let's face it, I've always had a soft spot for this particular brother's kids.

Ain't no thaaang but a chicken wing.

In saying that, they're going to spend the day with their Aunty and cousin. This equals freedom. Going to sit at my Mum's all day and pretend I'm 10 years old again.
at October 26, 2014