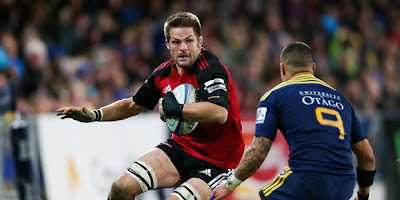 I missed the game on Saturday, so I watched it the next night on MySky (Tivo).
If ever there was a game to watch in all of this super rugby season, this was it. A perfect example of New Zealand rugby and the skill, from both sides, was constant. It was breathtaking. For real. The Highlanders were volatile but, even after they sinbinned McCaw, Crusaders owned despite the Highlanders lead at half time.

It was the last minute that was the heart stopper. With a score of 30-32 to the Crusaders, the Highlanders were in posession and Osbourne ran the ball into the corner post only to be stopped by Dagg and the ball synchronously touched the try line and goal line.
No try.

Tyler and I argued for the 5 minutes the TMO replayed it.
She said try, I knew it wasn't.

I wish otago won. Glad it was awesome.