With only 3 days left to do anything, the floor should be done tonight. It took a while getting the lino out. There were 2 layers of the stuff above the original floor boards, which are not restoreable because back in the 60s-70s, tar was a common adhesive and there is a layer of tar above the boards where the first lino was placed. It was an effort to get the floor level and involved shovels, a crow bar, chisels, hammers, hacking and Uncle Stan. I had no part in it, but Mitchy almost killed someone with her chisel technique. 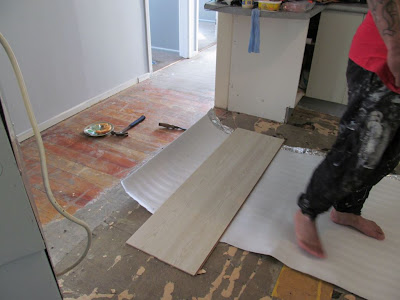 All walls are painted. Very grey.
We've had ongoing convo's about brother and his bi-polar reno attitude. He jumps from one place to another, changes his mind about colors, tools and directions. I've been giving him crap since Monday about it, while Mitchy sits in the corner giggling about it quietly lest she be kicked onto the couch for the night .. and the couch is outside in the shed waiting for the floors to be done. 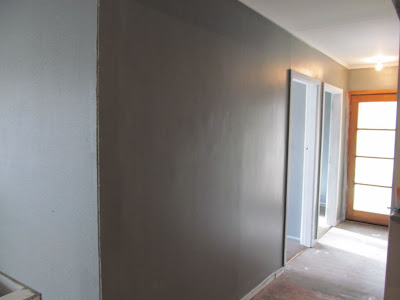 Testing out the new handles on the cupboard.
It goes this way.
No it goes this way.
You open with your right hand. It should face this way.
But it looks better this way.
B1: It's this way. Just give it, I'll do it.
Bi-polar, go back and sand your wall.
Shut up. 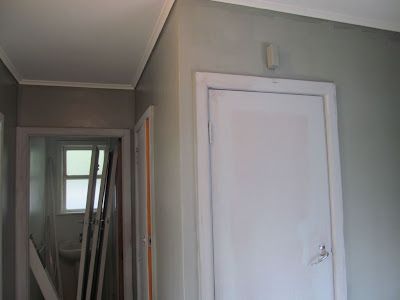 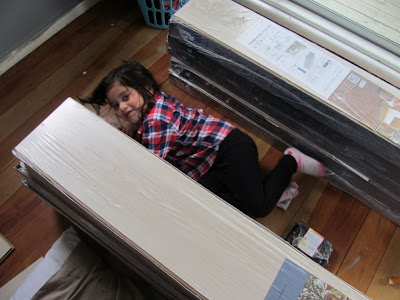 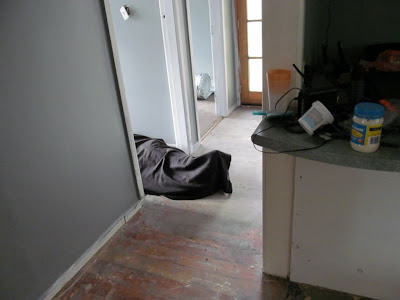 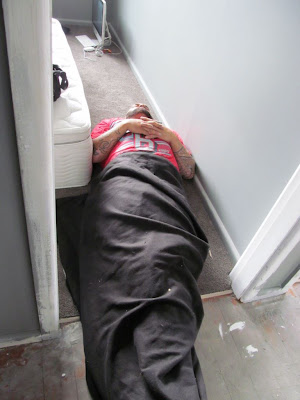 Trim on the corner. 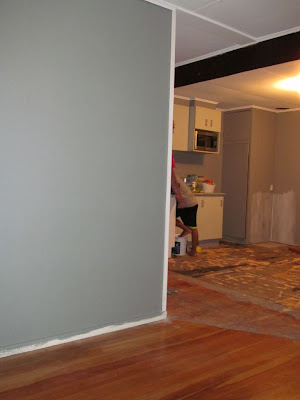 While Mitchy and I were sharing our decorating ideas, brother rolled his eyes and told us we weren't designers.
Shut. Up. 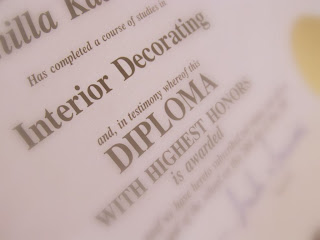 Foot:
Doctors appointment yesterday. The stupid thing got infected. My body rejected the anti-biotics they gave me and made me want to purge. When I did, it was foamy. Can't afford to have a homeostatic imbalance mate. I missed the elimination labs yesterday in skills where the class did the practical of what the lecture taught us on Tuesday - stool and urine samples.

Weather:
It's been raining since last Saturday. I have lots of laundry that needs to be laundered. It's supposed to rain till next Friday. A minor downside of rural life, upside? Carport lines. Downside of having one? Mine is full with my Parentals and The Livians clothes. Washing the important stuff today = towels. They will have to inside dry and make my house feel damp. There is no other way.

Rugby:
I have let the rugby God's down the last 2 weeks and have 5 games yet to watch on mysky. I will get to those this weekend. 3 NZ teams have byes this week, so it's just the Crusaders and Chiefs to watch this weekend. Will omit MAC's game against Taradale this week for renos and my essay that's due next Wednesday.

Hello Beauden Barrett. I may have to dump my other imaginary boyfriend. He has impacted the Hurricanes team this year. Historically, the team have been below average, but their game play is not out of desperation anymore, it's because they have a team that have rugby in their DNA this year and not melancholy.