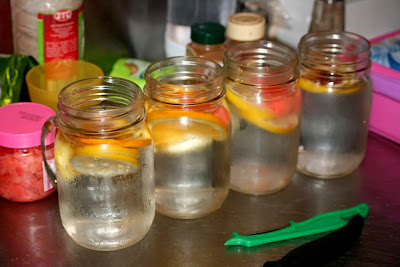 We'll start with lemons.
Did you know in ancient Egypt, lemons were consumed for medicinal purposes? True story. From the top of my head, lemons are a liver cleanser. If your liver is happy, everything else will be happy. Lemons promote immunity because of whats in them, namely, pectin, vitamin c, bioflavonoids and blah blah blah.  Combined, they fight infection.
Oranges.
It's funny that oranges prevent kidney disease unless you have kidney disease. It's basically like the lemon. Oranges alkalize the body. Also contain vitamin c and pectin, as well as vitamin a , calcium, potassium and so forth.
Cinnamon.
Everyone should know that cinnamon regulates blood sugar.
Cucumber.
Diuretic. Reduces cholesterol. Controls BP. Relieves gout.
Ginger.
Sets the digestive juices in motion. Relieves an upset stomach. Also cleanses the palate so you can taste the next piece of sushi you shove into your tempura hole.
Paprika.
Vitamins A, E, B6 and iron. Paprika contains capsaicin, which lowers blood pressure by relaxing blood vessels. 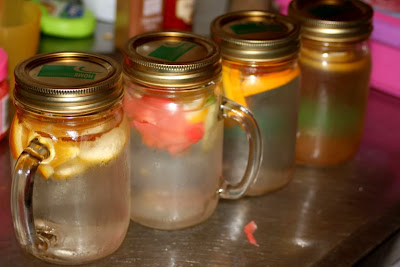 They need to sit chilling for 24 hours. Pouring hot water over them will infuse them sooner, but that will also cook the fruit and fruit doesn't grow to be cooked, that's an abomination.
at March 22, 2014

i took this AMAZING class in college that was called something like "native american environmental education" and it was about native plants and how they had been used by people in the region pre-colonization. it was so great, i learned a ton. we did oil infusions, and i still make them. daniel learned too, and he called me the other day at 1am to get the recipe for a particular infusion. yay healthy! :)