The Leprechauns wore black this morning.

November 25, 2013
I almost didn't get up for the game.
I spent the first 40 asking myself how many All Blacks it took to screw in a light bulb. Tragic start. At 80 minutes I was about ready to vomit with a 22-17 score to Ireland .. then the All Blacks decided to come to the game and Ryan Crotty saved the day after 2 suspected forward passes, nice try Nigel Owens. This evened the score 22-22. As Cruden went for the conversion, Ireland charged early. He missed that and got his reprieve in another kick for the early charge. Game over. 22-24 to black.

The All Blacks were relentless, but Ireland showed the world that they can beat the best team in the world. The game was gut-wrenching, dramatic and very much so emotionally charged. It was the most I've sworn and applauded in my lounge since RWC 2011. 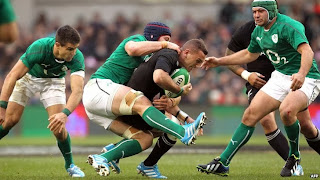 Best game of the 2013 season and what a game it was.
Hats off to the Irish.