Woke up this morning with a plan to travel to Auckland for the weekend, just because.
I told myself I'd decide by 10am.
School called at 9am, I missed the call and the message said they'd try again after 10am.
I sat around waiting for a call that came near 11am.

Step-Dad visited and I asked him to fix my weed eater. He said he would need a favor later. Didn't say what, so I planned my trip.

Went out to my car and it wouldn't start. Because it's a newer car, 10+ years newer, than the last car, the noise it made wasn't at all familiar nor did it sound like what an alternator should sound like when it's jacked up. Called the car yard and left a message for the dealer to call back.

Meanwhile, I turn the house upside down trying fratically to find the warranty and insurance. Google says it's the alternator. I look up auto forums to see what was said and nothing gave me warm fuzzies. "Ripped off", "Holden Vectra's are bad cars", "Vectras always have alternator problems". etc. Something in the forum points me to starter motor issues, "$400 to replace" blah blah blah.

Two hours later I find nothing, but the phone call comes. 2pm. It's just the battery and it was. I can still make it to Auckland. 3pm my step-dad calls for that favor.

A weekend at home.

A handy statement of the principle for scientists is "when you have two competing theories that make exactly the same predictions, the simpler one is the better."
If you have two equally likely solutions to a problem, choose the simplest. 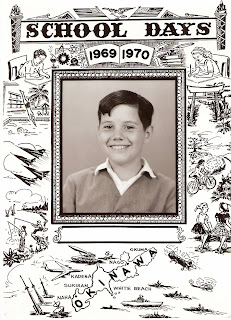 This bought a smile to my face today. An email from Larry's Mom with photos of him as a kid.
The other thing that made me smile was Hubba tormenting Rome and Rome losing the plot because of it.