You thought you'd been spared a rugby post didn't you.
No chance.
How many men in a rugby team? 15.
Remove 2 to the sin bin and how many do you have? 13.
All Blacks beat South Africa with a 13 man team. Let's face it, that's like taking on Mayweather blind folded with your arms tied behind your back. Not really.

Bismarck du Plessis got yellow carded for the Dan Carter hit subjecting him to 10 minutes in the sin bin. Then he hit Messam, on purpose, and got the red card (off for the rest of the game). Reckless and awesome.
Sam Cane was a machine. Gash to the head didn't stop him. 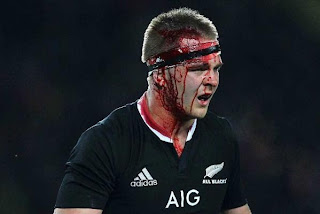 But it was fellow Hawkes Bayer Retallick who won me over.

That Kieren Reid .. he does a better haka than some Maoris I know.
I've been wishing for someone to shut commentator, and has-been All Black, Justin Marshall up since 2011s RWC. If you're on Facebook, trust me and like the page. 20,000 Likes is supposed to do it.

He, alone, commentating is worse than 4 Australian commentators combined.
at September 15, 2013