Iron Maori is a movement that sparked from its founder, Heather Skipworth, participating in an Iron Man competition. She had a vision to take youth away from contact sports, to avoid potential life long injuries, and instead compete in a triathalon that was half the distance of the standard Iron Man (2km swim, 90km cycle, 21.1km walk/run.). In 2009 she did that. 4 years later, it's bigger than I'm sure she could ever have imagined. Last year's Iron Maori had over 1500 entries.

Tyler signed up for Iron Maori this year. 4 months shy of the date, she came to that decision after talking with friends. She's been training for a week and seems to be doing ok .. can't get off the couch to do the dishes, but has dedicated herself to run 21.1kms. I think it's fantastical, the whole thing and young people getting involved.

What did Tyler have for lunch on Saturday (with 3 YW)? 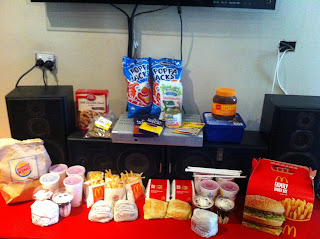 I'm going to spectate .. and possibly give her First Aid.

Heather and Missy, founders, were Larry's life coaches back in 2010 when he was first diagnosed. Because they weren't well knowledged on renal failure and the lifestyle changes needed to maintain it, we didn't really need them, but they were an awesome encouragement.
at September 09, 2013

thats awesome for her! i've never been much for running (i flat out hate it) and have only ever run a 5k to raise money for my friends teenage sister who had ovarian cancer, but in tucson i would cycle 25 miles a day ( i dont know what that is in kilometers). hope she does awesome! she can be like that swimming lady who just swam from cuba to florida :)