This first batch was a bit of a fail because I walked away from the reducing cream and it boiled over, so I lost half a litre. It's a basic recipe, but so good when done right.
Mussells
Imitation Crab (Surimi)
Cream
Salt
That simple.
Boil the cream then simmer to reduce it.
De-Shell cooked mussells and chop.
Surimi is made up in layers that will fall apart into pasta like strips when you move a piece through your finger tips. I could have made smaller portions on both meat.
Simmer for a thickening.
Leave it to cool for an hour and reheat.
Season to taste, but the recipe calls for alot of salt and that's understandable because when you whip cream you add salt to make it whip better. Reducing it is essentially the same thing, but with heat applied.
I added butter because, let's face it, butter is a Maori mans medicine and you just have that on everything. 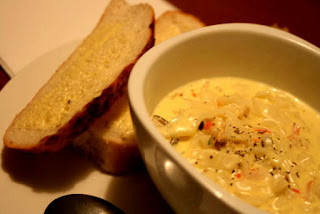 Had no dill for garnish so used dried basil, which was nice with the foccacia.
Thanks to The Browns for the recipe. I first had it back in 2009 and I had been looking for the recipe since. They so kindly graced me with it last night. They're awesome.

Email ThisBlogThis!Share to TwitterShare to FacebookShare to Pinterest
Labels: food

this is my favorite poem, by e e cummings. its gotten me through some tough times (usually because i would just go to the beach). hope you feel better:

Maggie And Milly And Molly And May
maggie and millie and molly and may
went down to the beach (to play one day)
and maggie discovered a shell that sang
so sweetly she couldn't remember her troubles, and
millie befriended a stranded star
whose rays five languid fingers were;
and molly was chased by a horrible thing
which raced sideways while blowing bubbles: and
may came home with a smooth round stone
as small as a world and as large as alone.
For whatever we lose (like a you or a me)
it's always ourselves we find in the sea.