Battle of the binkies.

This is the Miomee Orthodontic binky that's supposed to fix the atrocity that is her teeth. They aren't that bad and Rome's got better when her binky was taken from her, but I don't want to be that harsh (even though it was my idea with Rome), so I got the Miomee.

When I try to take Hubba's away from her, she's a loose cannon for the rest of the day and it just isn't worth it sitting in the closet rocking back and forth with a pepsi max and a snicker bar trying to restore your chi. She's accepted that she isn't allowed to bring it with her when we leave the house, but when we're home, the circus comes to town if she doesn't have it. 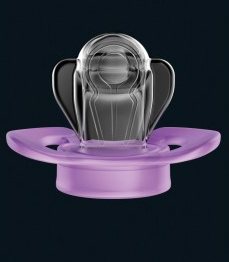