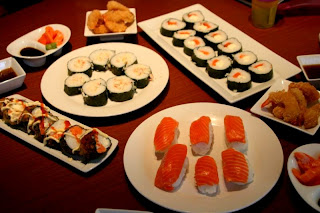 A year ago in March I tried my luck with home made sushi.
Worked like a charm.

Your headstone is up. I knew it was being done today and hoped to catch the installation of it. Winged it and went to the cemetery in time to watch him place the stone on it's base and the photo.

It's classy, it's elegant and you would probably think it was a huge waste of dineros.

Maori tradition is to "unveil" the stone in a short ceremony. Tradition also called for it to be a year after passing, but you know how we roll.

More on the unveiling next Friday .. which is my birthday incase you wanted to send me a heavenly gift. A golden rose from a divine garden should suffice ... and not a chocolate one. Maybe.

Email ThisBlogThis!Share to TwitterShare to FacebookShare to Pinterest
Labels: Larry, miss you