The child has a dummy habit that I can't rid her of. The last three nights it's driven me insane because she'll wake up and cry until I go search for it under the covers at 3am, 4am and 6am. When we broke Rome of her dummy habit at 3 years old, we cut it in front of her and she cried for a good 30 minutes before she got over it .. and she did.

I tried to cut the binky today and I was attacked by a 2 year old who threw a shoe then bit me.

Then theres the TV watching. I don't know where she picked it up from, but TV is her everything at the moment and it came out of no where. For the last 2 weeks it's been everything TV. "I want to go home to watch TV", "Everyone needs to go home so I can watch TV", "I don't want breakfast, I want to watch TV". The only thing that comes before TV is her binky.

She is a defiant little animal and apparently it's my fault. 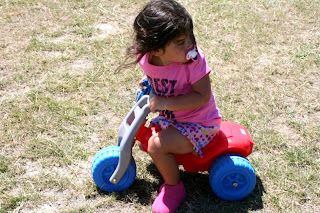 I need a Dummies for Motherhood or something because my only other option is making a piñata out of the monkey.
at February 27, 2013