Thought I'd be romantic and take Larry up to Te Mata Peak last night. All was going well until he started to complain of chest pains that became excruciating by the time we got home.

Long story short.
He was admitted to the emergency department tonight for a suspected heart attack. Remember we talked about being overloaded by not sticking to his fluid restriction?
This is what happens when you don't listen.

Good news, by 4am when I left he was doing much better (thanks to cousin Morphine) than the teenager who came in after he drank Roundup (weed killer) because his posse ran out of beer tonight. 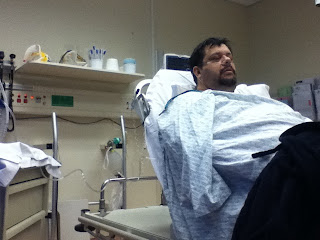