American football was an acquired taste for someone who grew up on rugby. I got the general idea after a few years in the USA and I stopped watching the Super Bowl because of the half time performances (Thanks Janet Jackson & Justin Timberlake) and began watching the actual game. SKY TV has ESPN, I'll be adding it to my cable line up this weekend for the game, which I will be watching alone because Larry will be at dialysis.

Monday is also Waitangi day in NZ. Celebrating the signing of the treaty. I don't know why we celebrate it when most maori still complain about it. Won't get in to it because my Waitangi day will be spent watching the super bowl.

As summer nears its end, so do our plants.
I pulled the red onions today, re-rigged the tomatillos that got wind damaged and were growing aross the ground instead of up like normal tomatillos should. Thinned some wind burned leaves from the hanging romas and killed the cherry tomatoes. 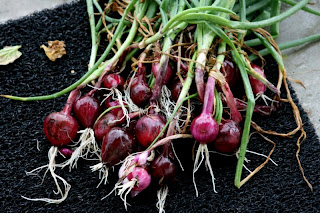 Hanging them upside down was not a good idea when summer time is a windy season. All three plants got wind damaged. 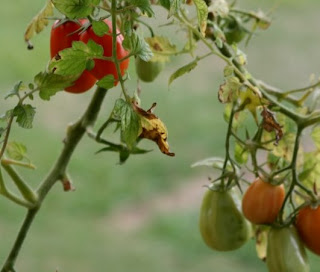 Free weekend. No Saturday dialysis.
On our 'to do' list for 2012 one 'do' was to go on a date once a month. Last month our date was through the drive thru of McDonalds with two giggling girls in the back seat. Tomorrow we may go to the restaurant our niece Tyler works at.