We took our niece Shailahzay (how many times did you say her name out loud?) out for her birthday, which was 2 weeks ago. We were supposed to see Harry Potter, but Senor Shultz begged for Captain America. 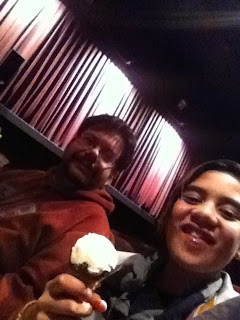 Slow. Holes in the story. If it weren't for the popcorn cruncher behind me I would have completely fallen asleep.

But that isn't the point.

The Recormon is sure working it's magic. As you can see he's wearing his prescription glasses. The $500 pair that hadn't helped a bit since we got them 10 months ago. He didn't see crisp sharp lines, but he saw clear enough to follow along and when I'd look over at him, his eye's would be panning in sync with the movement on screen. This made me happy. Now we need a cinema standard screen to hook his computer up to so he can get back into LightWaving and being a menace on the forums.

Fun! I'm go glad to see you all out and about. I thought Capt. America was kinda good, actually... but then again I am easily entertained...